Greetings and welcome or welcome back! Today's blog is some good news out of New Jersey. Yesterday, representatives from the Shark Research Institute, Humane Society, American Littoral Society, and Jenkinson's Aquarium testified in favor of a bill that would ban the possession, trade, and sale of certain shark fins in New Jersey. I am proud to say that I was one of those testifying in favor!  The bill has already passed the state senate and as of yesterday has now passed the assembly appropriations committee by a vote of 8-1.

From here the bill will travel to the state assembly for a vote and if it passes there, it will head to the Governor's desk. I will be sure to post update blogs as things progress with this bill for better or for worse. So what is this bill? The bill is pretty self explanatory. The bill, if signed into a law would bad the sale, possession, and trade of shark fins in New Jersey. While it may sound self explanatory there is some things within the bill that ease some of the opposition's feelings.

First, this bill does not ban the sale of shark fin soup in the state of New Jersey. What it does ban is restaurants illegally obtaining shark fins from other countries, states, etc.. If a restaurant is obtaining fins in a legal manner, then there will be no issue. Keep in mind though the massive problems that shark fin soup is linked to for both humans and sharks alike.

This bill does not hurt recreational fisherman who are good honest fishermen. It will hurt those that catch a shark for the fins and just dispose of the shark's body though. If a fisherman wants to sell the shark's fins, they can. However the whole body of the shark must go with the fins attached. I guess another inconvenience would be that charter boats will no longer be able to nail shark fins to the dock as trophies.... Apparently that's a big deal somehow... Not going to try to explain why that is significant in the long run. In addition, the bill does allow for shark fins to be possessed consistent with licensing for fishing.

Finally, believe it or not, shark fishing is a very tiny market in New Jersey. In fact, 2016 shark fisheries accounted for a whopping 0.51% of all the species landed in the state. Yes, not even 1%. The impact overall of this bill will be minimal and will help to close the loophole in the national shark finning laws. So far 13 other states have passed similar legislation with the most recent being Texas. Even states that are completely landlocked (Nevada) have gotten in on the bans. More locally Delaware, Maryland, Massachusetts, and New York all already have similar legislation in place.

Fingers are crossed and all eyes on the next state assembly meeting where this bill will go up for a vote. If you are a resident of New Jersey, I, along with over 25 organizations whom have signed on in support of this bill ask you to call your legislators and tell them that you support bill A4845! As always thank you for reading and stay tuned as more news about this comes out!
Posted by Hydraminion at 4:39 PM 7 comments:

Hello everyone, today I will be starting a new blog type that I am going to call Species Focus. These blogs will be educational blogs designed to give some fast, basic facts about different species of sharks, rays, dolphins, and whales. Though the majority of these blogs will focus on sharks and rays, I do plan on sprinkling in dolphins and whales from time to time. The first species I'll be focusing on is the Southern Fiddler Ray. 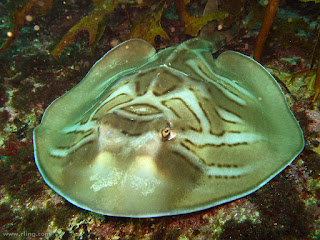 The Southern Fiddler Ray is a guitarfish that prefers to spend it's time on the sandy, shallow bottom of the sea. It is also known as the banjo shark and the fiddler ray. This species of ray can be found exclusively along the southern coast of Australia. As mentioned previously, they prefer shallow waters, but can be found in waters as deep as over 500 feet.

Like many other species of ray, the choice of food for this species consists largely of shellfish and crustaceans. The Southern Fiddler Ray can grow to be around 4 feet in length and weigh around 15 pounds when full grown. This ray gives live birth to 4 to 6 pups per breeding season. The gestation period of this species is one year (12 months). Interestingly enough the baby rays rapidly develop over the final few months of gestation.

These rays pose no threat to humans and they are of little commercial interest. That being said, the meat of these rays apparently taste pretty good so there is a small demand for it. The fiddler ray is a popular ray in aquariums around the world. They adapt to life in captivity very well. They are known to quickly pick up on target feeding and will still bury themselves in the sand of their exhibits as they would do in the wild.

When it comes to conservation, the Southern Fiddler Ray is currently listed as a species of "least concern". This means that the populations do not reach the criteria for being threatened, vulnerable, or endangered. While there are no protections for this species of ray, it does make it's home in some marine sanctuaries and protected zones. The fiddler ray is abundant throughout its range.

Thank you for reading the first of my Species Focus blogs!
Posted by Hydraminion at 6:31 PM 8 comments: