The Whale Wars Set To Reignite?

Greetings everyone. It has been quite a while once again. Since my last blog, life once again decided that it had some other plans for me and I have not been able to actually type up a blog. That's quite unfortunate because there is a lot of stuff that I would have liked to had covered as it happened, but I'll just have to touch on it as I go now. Long story short... Honeymoon planning, work, wedding thank you cards, and various other things all stacked onto one another and really prevented me from blogging. Also, I did not want to post anything during election season considering the issues surrounding both candidates and the varying views on environmental stuff, I did not want the blog to go in a direction I never intended it to go in. With the election over and life finally slowing down a little bit I am happy to be sitting at the keyboard again blogging about things that are going on in our Oceans. Awareness and education remain the key of this blog and that continues with this blog entry.

Japan's whaling fleet has left it's home country and is once again heading to the Southern Ocean to hunt whales for what the country deems as scientific research. Back in 2014 the International Court ruled that Japan's whaling program was not scientific, but commercial whaling which there is currently a moratorium on. So Japan was forced to scrap it's program and the whaling fleet stayed in port for the 2014-2015 season. The following season however, Japan defied the International Court and returned to the Southern Ocean and hunted down roughly 300 minke whales. This number was significantly lower than past hunts which also saw humpback and endangered fin whales hunted as well. The Japanese whaling fleet's quota for this season is 333 minke whales, which is the same as it was a year ago. 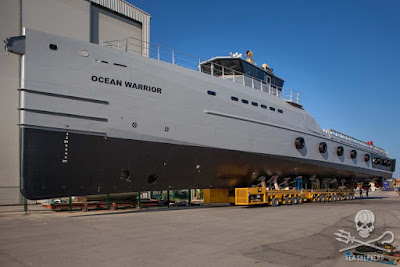 Photo: Sea Shepherd Conservation Society
This ship could once again turn the tide in the battle of the Southern Ocean as it is faster than any ship in the whaling fleet. It also has a helipad so in addition to whatever radar systems the ship has, it will have the added benefit of a helicopter in the sky as well. Perhaps to combat this new ship, or just to increase their area, the Japanese whaling fleet has doubled the area in which it's ships will be hunting. Currently the Japanese whaling fleet is heading south and will remain there until sometime in March, 2017. The "Ocean Warrior" is currently docked in Australia awaiting it's time to head south and try to intercept the whaling fleet.  It is interesting to note that Sea Shepherd founder, Paul Watson and the rest of Sea Shepherd USA remain unable to assist Sea Shepherd Australia due to a court ruling against them by the United States Government. Only time will tell if the Whale Wars that climaxed a few years ago in a heated season that saw several collisions including one with a refueling ship.

As I have done in the past I will try to keep everyone updated here on what is going on in the Southern Ocean Whale Sanctuary. However, for any breaking news I advise following Sea Shepherd Australia on Facebook and Twitter if they have one and keep watch at www.seashepherd.org . Stay tuned as I will have more blogs coming in the near future. One of my next blogs will probably be an update on the Cove in Taiji, Japan as that slaughter is well underway.
Posted by Hydraminion at 6:34 PM 3 comments: