The Most Misunderstood Animals on Earth

Greetings again everyone. Now that the chaos that is the aftermath of Hurricane Sandy has kind of leveled itself out a bit I actually have some time to type up this blog. Needless to say that means Operation Sadistic Truths is back underway. So here we go!

Sharks have, for a long time now, been considered a misunderstood animal. Out of the over 400 species of shark that live in the Ocean's today, only a small handful have ever attacked, let alone killed a human. Whenever there is a shark attack, it is basically slammed all over the news. It does't seem to matter what is going on in the world, if there is a shark attack, that takes presence over everything. One person getting bitten and in most cases not killed by a shark becomes more important and causes more panic in different places around the world than two countries bombing the existence out of each other. It sounds kind of absurd no? However, it seems to be the world we live in. My question is why do shark attacks have to get media attention almost every time one is reported? Off the top of your head you might think it's because shark attacks are so rare, but that really isn't the case. Yes shark attacks are incredibly rare. Yes sharks kill on average 5 people each year. Here is the kicker. Yes, many people have a massive unjustified fear of sharks. That is the selling point to shark attacks being all over the news when they occur. The media preys on that fear to get people to watch their particular show. When you see a commercial saying "Shark bites man in Florida, full story at 11:00." You better believe that people do, out of fear stay up for what turns out to be something along these lines.... "Today a shark bit a surfer in Florida. The surfer has been taken to the hospital where he or she is expected to make a full recovery. The identity and whereabouts of the shark is currently unknown." There it is. The fear that that shark is still out there, waiting for it's next potential meal to enter the Ocean. Outside of local media stations that should probably report just about everything happening in their community, there is no reason for shark attacks to make state, national, or international news. This past summer was a perfect example the media not only blowing shark attacks out of proportion, but instilling renewed fear of sharks in a lot of people. Here in the United States there were several news stories that hit all major networks involving shark attacks.... in Australia... I'm sorry, but I just do not see what the point in internationally broadcasting that is outside of a poor attempt at making people want to watch the news to see what happened. So now that I've hopefully explained well enough why there is no reason to go into mass panic over shark attacks. Again, they are incredibly rare, in fact your odds of a vending machine (Yes like a Coke or Pepsi Machine) falling on you and crushing you are greater than being bitten by a shark. Also, most shark attacks are not fatal. If you hear on the news that there was an attack, but don't hear anything about the fate of the person who was bitten, assume they are totally fine because the media loves to call out when sharks kill people.

There have been many species of shark that have been labeled man eaters, killers, monsters, demon fish, man hunters, etc. Some of them have gotten a worse unearned reputation than others. Some in fact have never killed a person, but have been labeled as a man eater nonetheless. The most well known of these species is the common thresher shark. Thresher sharks are a large species of shark with a freakishly large tail. If fact here is a pretty decent picture as to what one of these sharks look like.

See what I mean about the tail, huge right! All right so what makes this animal a "Man Eater"? The thresher shark has been deemed responsible for 0 unprovoked attacks on humans, 1 provoked attack, and 4 incidents that involved fisherman on a boat. None of these attacks resulted in fatalities. What about that massive tail? There is a heavily fabricated story that a thresher shark once jumped out of the water and cut the head off a fisherman. The head of the man was never recovered and oddly enough, that person's body also seemed to mysteriously vanish. Odd... In reality though, a thresher shark's tail is not sharp at all and would not be able to cut the head off a human. The tail is used to school it's prey of anchovies, mackerel, bluefish, etc. Threshers will slap the surface of the water with their tails to scare fish to the front of them and then eat them. Though this man eater has never KILLED A SINGLE PERSON, it is still a shark that many people fear. It is also heavily threatened with extinction thanks to long line fishing and shark finning practices. If you've read any of my other blogs on sharks you are well aware of both of these practices. Both are highly unsustainable and result in the deaths of OVER 40 MILLION SHARKS EVERY YEAR. 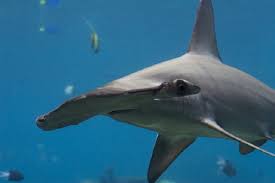 Get it? Hammerhead? Well that was lame. Moving on... So we have three species of shark that have been deemed man eaters for killing 1 person in 400 years. On the opposite page of that story, all three of these species are ENDANGERED SPECIES. They are literally being wiped off the face of the Earth for their fins. These sharks come in contact frequently with swimmers, surfers, divers, etc and as witnessed by 1 fatality in 400 years, very rarely bite. They inhabit both deep and shallow waters so it is not uncommon to see them right along the shoreline. In fact, one hammerhead was seen surfing the waves in Seaside Heights, NJ, this past summer. It did not bite anyone, it just minded it's own business. So there you have it. Three more species of shark that have been labeled man eaters that really have not earned that kind of a name at all.

The question probably going through your head right now is "Well what about bull sharks and great white sharks?" Funny you should ask... Bull sharks, in my opinion, the most aggressive of all sharks are a very formidable animal that has been deemed responsible for 17 human fatalities in the last 400 years and have bitten 69 people. Out of the 17 fatalities, there is no confirmed reports of the shark actually eating the person. Even during the New Jersey 1916 Shark Attacks in which a bull shark is often blamed due to the attacks that took place in fresh water (YES BULL SHARKS CAN SURVIVE IN FRESH WATER) not a single person was eaten by the shark. Look at it this way though. Bull sharks live largely in shallow water right along the coastlines in warm waters. I'll use Florida as an example. If you have ever been to Florida, surely you have seen people swimming in the surf. That is the favorite place of bull sharks, right in shallow waters. Within the surf of Florida there is often very curious animals. These large sharks are capable of delivering a killing bite, but rarely do because when they bite, they are usually trying to figure out what a person is. The sense of touch of a shark is not on it's skin like ours, rather it is in their mouths. For an idea of what a bull shark looks like, check out this picture.

Oh look a man eater swimming around people and not eating them! Didn't know that happened....... Moving on again...

Saved what a lot of people would consider the best for last. The great white shark needs no introduction really. The star of the movie Jaws has been paralyzing people with fear since the movie came out. The question though is this. Is that fear really justifiable, and are great white sharks really man eaters? The answer to both of those questions is simply no. I've talked to a few people who have refused to go into the Ocean out of fear of being bitten by a great white shark. They truly believed what they saw in Jaws was real life. Far from it. Great white sharks are incredibly complex and at this point rare animals. Scientists now believe that fewer great whites now live in the Ocean than tigers on land. That would mean less than 2,500 individuals. As of February 2012, great white sharks had been deemed responsible for the deaths of 69 people, that number in reality is slightly larger, but the International Shark Attack File has not yet been updated. So in reality we're looking at probably 72-75 people killed in the last 400 years. Same thing as with bull sharks, great white sharks have never been seen actually eating a person like we see it do in Jaws. There are accounts of great whites severing and eating limbs, but not of the shark returning and eating the entire person. We are just not what they are looking for. Most of the fatalities involved surfers whom the shark mistook as their natural prey, seals and sea lions. From underwater a surfer does look surprisingly similar to a sea lion, so it is pretty easy to understand how an animal that has no clue what a surfboard is and actually rolls it's eyes into the back of it's head before biting has no idea that it is actually biting a person and not a sea lion. Man eater? Hardly. Yes great whites have been linked to more shark attacks than any other species of shark, but again, the fatality number over the last 400 years is realistically small. On average you're looking at great whites killing about 5 people every year. That is a very small number considering hippos, dogs, alligators, cats, ants, and countless other animals kill far, far more people every year. You did read that right. Ants even kill more people every year than great whites. The truth can be shocking huh?

Hopefully now you can see the truth behind the insane things that are said on T.V. when shark attacks occur. When the words man eater become associated with sharks it really sends people into a panic which again is what the media is looking for. All of the statistics and numbers I gave to you today all came directly from the International Shark Attack File. Feel free to use them to educate others because all of the species that I mentioned and many more are facing the very real threat of extinction. Again, less than 2,500 great whites remain and three species of hammerhead sharks are endangered. Thresher and bull sharks are also at a heightened risk of extinction. All of their numbers are decreasing at an alarming rate. Extinction is forever and unless the truth about these animals is spread from one side of the world to the other, we will lose all of them forever. Remember. One person can make a difference. Till next time, I leave you all with this picture of a great white shark! 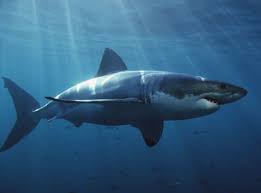 Posted by Hydraminion at 6:59 PM No comments: