Hello once again everyone and welcome! It's been a busy start to the New Year in regards to well everything that I try to cover on this blog so don't be too surprised if you see a few more blogs popping up this weekend. So let's dive right into today's topic.

Just three days ago and aquarium in Okinawa, Japan took in an adult great white shark which was caught near a village. The shark is the largest great white to ever be on exhibit. It measures roughly 11 and a half feet long. Prior to Okinawa attempting to keep a great white in captivity Monterey Bay Aquarium in California, USA, had tried 6 times from 2004 to 2011 to keep a great white on exhibit. One of the biggest differences between Monterey Bay's attempts and Okinawa is that all of Monterey Bay's attempts were done on juvenile great whites. All of those sharks wound up being released for various reasons and sadly two showed up dead shortly later. One for unknown reasons and one was sadly caught in a gill net in Mexico.

Getting back to Okinawa. Upon arrival to the aquarium the shark apparently was disoriented and needed to be guided around the exhibit by aquarium staff to prevent it from crashing into the walls. At one point the shark even stopped swimming and needed to be prodded into getting off the bottom of the tank. The shark eventually settled down, but from what I can find never had an appetite. The shark took a turn for the worse and sadly passed away this morning. Okinawa's attempt to keep a great white shark in captivity has failed as has every other attempt at keeping these animals in captivity around the world.

Why great whites fail to do well for any period of time in captivity is certainly a puzzle to many people around the world. There are really many reasons that these animals cant survive in captivity, many of which we probably don't even know. The things that come to my mind are that the tanks that we have are simply too hard for the constantly swimming sharks to navigate. Proof of this can be found in this story involving Japan. The general nature of the shark species itself probably lends a reason as well. Great whites are very aggressive by nature and even territorial. An example of this can be found in one of the sharks Monterey Bay tried to keep that bit other sharks, but did not eat them. It is thought that the shark was protecting it's territory. There are plenty of other reasons as well that these sharks don't do well. While none of these sharks should have been taken into captivity in the first place, Monterey Bay made the right move of releasing these animals as soon as things started to go wrong. That led to 4 of the 6 surviving and the 5th shark probably would still be alive today had it not been for the gill net.

The bottom line is that great white sharks plus captivity does and probably always will due to many reasons, equal disaster for the shark. As amazing as it would be to let people have the opportunity to see these animals up close without needing to go out on a boat or go to a beach, right now I just don't think it's possible and that is not really a bad thing. 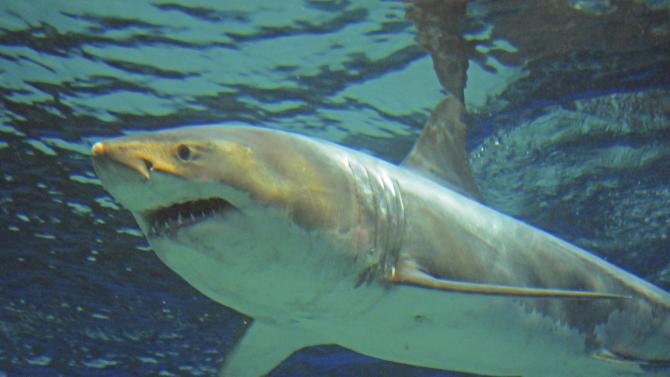 Posted by Hydraminion at 2:30 PM